What is Deep Brain Stimulation (DBS)?

What occurs during DBS surgery?

What type of preparation is needed for DBS?

What takes place after the surgery?

Where is the battery placed?

How and when is the battery replaced?

When should someone consider DBS as a treatment option?

What are the possible negative side effects?

Why would DBS be performed bilaterally instead of unilaterally?

What percentage of people with DBS cannot tolerate it or need to have it removed?

If there is an infection and the DBS is removed, can you have it reinstalled at a later date?

Can I stop taking my PD medications with DBS?

How often does programming occur and why?

Can I adjust my own programming?

Ask the Expert – Freezing of Gait 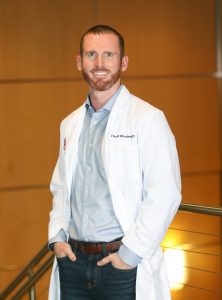 Dr. Eric Rhoden, PT, received his Bachelor of Science from California State University San Marcos and his Doctorate of Physical Therapy from Loma Linda University in Loma Linda, California. Eric is a certified PWR (Parkinson’s Wellness Recovery) therapist and prior LSVT BIG certified. He has specialized in the movement disorder population since 2014. He has a fitness and orthopedic background, which he has fused with his passion and knowledge for the movement disorder population to create comprehensive and individualized treatments. Dr. Rhoden educates patients on the relationship of nutrition and systemic body function. He is one of the primary deep brain stimulation programmers at Neurology Solutions Consultants for the past 5 years. He brings a unique perspective to the deep brain stimulation programming and utilized individualized assessment tools to maximize benefit.

Dr. Rhoden is married with an 8 year old son. In his free time, he enjoys serving at his church, coaching his sons sport teams, cooking, outdoor activities, and competing in fitness competitions.

Dr. Bose is a movement disorder specialist with over 20 years of experience in the medical field. She is also an Assistant Professor of Neurology at the University of Arizona, where she completed her residency and fellowship. Her clinical interests are in Parkinson's disease, movement disorders and ion channels.